Have you ever been stuck inside on a rainy day? It can be frustrating to stay inside when it is raining (although you could keep track of how much rain you’re getting with a weather station!). If you’re in the rainiest city in the US, it’s far more likely to be raining or snowing outside than sunny.

You might be surprised: Seattle isn’t the rainiest city in the US, and we’ll explain why later on. The award for America’s wettest city goes to Rochester and Buffalo, New York, both with 167 days of rain — almost half the year! We used precipitation data from National Oceanic and Atmospheric Administration’s National Climatic Data Center to determine our list and limited the list to large US cities.

What is the Rainiest City in the US?

In order, the US cities with the most rainy days per year, defined as more than 0.01″ per day, are:

We should note that the number of rainy days doesn’t necessarily equate to the most precipitation. If you measure the rainiest city in the US this way, Mobile, Alabama, which sees 67 inches of rain per year, would take the top spot. Along with New Orleans and the Florida Panhandle, Mobile sees so much rain because it is in a prime location — the Gulf Coast — for landfalling tropical systems. The city remains wet during the winter months, while southern Florida tends to dry out. However, the rain comes in shorter periods and isn’t spread across many days like some other cities. Why Rochester, New York, and Buffalo Are the Rainiest Cities

Rochester and Buffalo are two of the rainiest cities in the US due to their proximity to Lake Ontario and the Great Lakes. The lake effect brings a ton of moisture into these areas, which leads to more precipitation. While the average annual rainfall in these cities is only around 30-40 inches of rain each year, it is spread out throughout the year.

They also have a more extended rainy season than Seattle. While Seattle has more rain in the winter, Rochester and Buffalo experience rainy seasons during spring and fall with frequent weather systems. Heavy wintertime lake effect snow adds to the precipitation totals. Both cities average around 90 inches of snow every year, making them two of the US’ snowiest major cities.

Why Seattle Isn’t the Rainiest City in the US

Seattle’s weather conditions are influenced by the rain shadow effect, proximity to water, and wind patterns.

The city of Seattle is located in an area where there isn’t much precipitation to begin with because it is on one side of a mountain range that blocks rainfall from reaching the area. The Olympic Mountains block about half of all incoming moisture from the Pacific Ocean from reaching Seattle.

Seattle also experiences a “rain shadow” effect due to its proximity to water and prevailing winds that bring in more moisture-rich air from over the ocean rather than off the land.

Wind patterns also drive Seattle’s shifts between wetter and drier weather. During the winter, winds flow in from an easterly direction. When they hit land near Seattle, these moist air currents bring water vapor over the ocean and drop it as precipitation. During the summer months, these westerly-bringing wind currents tend to not transport much moisture for Washington State and the interior Pacific Northwest due to high-pressure systems, which lead to less rain during the summer in Seattle.

Why Miami, Florida Gets More Rain in Summer

If you live in Florida, you might think that summertime thunderstorms that seemingly happen every day might make coastal cities like Miami the rainiest city in the US. But sunshine, especially in the winter, is much more common than you think. Miami is rainiest in the summer and drier in the winter, opposite Seattle. There are reasons why this happens.

The city has a subtropical climate with a wet season between May and October, when it experiences its highest precipitation. During this time, hot, humid tropical air masses are pushed northward by easterly winds from the tropical Atlantic, which precipitate as they push up against the Florida eastern coast. Low systems such as hurricanes and tropical storms also add to rainfall totals during the summer.

However, the city has much less rainfall in the winter as high-pressure systems are firmly in control, steering storms away from the city and the rest of the state.

Why Ohio is As Wet As Seattle (And More So)

Columbus, Cleveland, and Cincinnati have just about as many days with measurable precipitation as Seattle, even though they are considerably inland — making them surprising entries in the list of the wettest cities. So why does this happen? The influence of the Great Lakes, the world’s most extensive freshwater lake system, plays a significant role in the weather patterns.

These two cities are very close to the Great Lakes, and they receive moisture from these significant bodies of water throughout most seasons. This is especially true in spring and fall when cold fronts drop southward off of Canada’s Hudson Bay, bringing loads of precipitation that soaks both Columbus and Cincinnati. Cleveland also sits on the shore of Lake Erie itself, giving it a source of moisture that other inland cities away from the East and West Coast do not.

While many other cities, especially across the Northwest and Northeastern US, also see well over 100 days with measurable precipitation, they didn’t quite make our list. Have no fear, though. The sun will eventually come out! 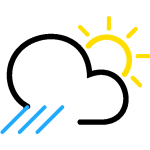